Turtles will return to Ponidzie 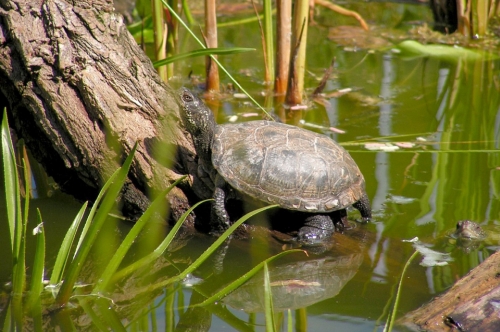 04 Dec Turtles will return to Ponidzie

They are rare in Poland and are under strict protection. They were last seen in Ponidzie 50 years ago. We are talking about mud turtles, which were once fostered by the unique natural features of the inland delta of Nida.

This year scientists from the Faculty of Biology at the University of Warsaw went on a search of the pond turtle. Its eDNA was also examined, i.e. water samples were taken from specially selected sites where the species was found. Unfortunately, intensive human activity resulted in the vanishing of the pond turtle without a trace.

According to Dariusz Wiech, a specialist from the Świętokrzyskie and Nadnidziańskie Landscape Parks Complex, in order for the turtle to return to Ponidzie, it is necessary to eliminate the so-called invasive species of  red-eared slider and the cumberland slider, which threaten the native species of the pond turtle, and prepare a suitable place for it to live so that the animals can reproduce safely.

– In the 90’s a lot of turtles were brought to Poland, 40 cm large, which are much bigger than our native turtle. The unwanted ones usually landed in rivers. In this environment, they have become incredible predators that have displaced our turtle, which means they have impoverished our natural flora and fauna, he points out.

Dariusz Wiech adds that the complex is in the process of developing a protection plan and the so-called reintroduction of the pond turtle into its old habitat. Moreover, turtles are to live in a dune surrounded by a floodplain, which will protect them from predators.

Pond turtles can live for over 120 years. The size of their shell is up to 20 cm.  They are also threatened by the drying of ponds and swamps.

Attempts to bring the pond turtle back are part of the project launched last year by the Świętokrzyskie and Nadnidziadzkie Landscape Parks Complex, which aims to restore the natural wealth of  the Nida river delta in Ponidzie. As we informed, the project covers a huge area of meadows near Umianowice in the Kije commune.

A lot of work will be done to rebuild old river beds, natural water reservoirs, as well as to restore the habitat conditions for endangered birds and other species under strict protection such as: snails, amphibians, toads, newts, the white-tailed eagle, marsh harriers.

A special reservoir will also be created under the project where turtles unwanted by people could feed instead of going to rivers.

Several decades ago, the wealth of animal species living in the Nida delta near Umianowice made this area unique on a Polish and European scale. The place is to become a natural and landscape showpiece again, and also to play an educational role, thanks to the Center for Nature Education being established in Umianowice.