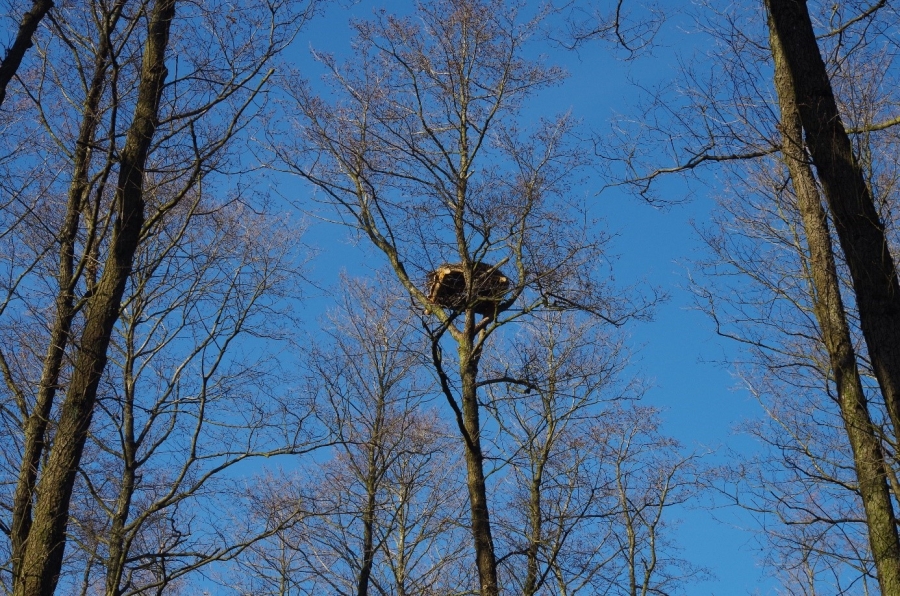 Posted at 10:16h in Aktualności by Milena Bilewska

A nest platform for a large bird, such as the white-tailed eagle, must be a sturdy structure, firmly attached to a tree because of the size of the nest that can be built on it. Birds of prey, just like storks, use the same nest for many years or even generations, sometimes taking on huge dimensions. In the case of a white-tailed eagle, it can be 2 meters in diameter and weigh more than half a ton. To realize its size, it is enough that an adult can comfortably lie on such a nest. That’s why it’s important to choose a sturdy, healthy tree in a quiet location with convenient access.

The platform itself is not a ready nest but its germ. Only on it, after taking the territory, the birds will build a nest. The platform was created in the forest complex managed by Pinczow Forest Inspectorate, where a pair of white-tailed eagles was found nesting. Birds of prey, as a rule, may have several nests in the area, which they use alternately depending on the local situation. In the event of an unfavorable situation around an existing nest, the birds will have the alternative of a ready-made nest base, where it is enough to add some material. Thanks to this, the risk of leaving the safe area within the Forest District will be minimized. It is worth mentioning the considerable merits of the State Forests and the Eagle Conservation Committee in the active protection of endangered animals, in particular the white-tailed eagle, which was one of ten species for which in 1983 By virtue of a decree of the Minister of Forestry and Wood Industry, protection zones were established for their breeding sites, becoming a precursor in the practice of nature conservation on a European scale.

Camera traps installed next to regularly populated nests are an effective and efficient way of monitoring what is happening there. To effectively protect anything you must first know it. This is no different. Large-scale research into the biology of white-tailed eagles, conducted over many decades, has had a measurable effect on the successful conservation of this majestic bird of prey. To confirm this, it is enough to cite a few facts. At the end of the 19th century the white-tailed eagle population in Poland was estimated at only several dozen pairs, and at the beginning of the 20th century there were only 20 pairs left, which was the result of direct human action and habitat destruction. From 1952 after the introduction of strict protection, the situation began to improve until the 1960s, when the massive use of DDT took a deadly toll on birds of prey. It was only after the use of hazardous chemicals ceased that there was a gradual increase in the population from about 120-130 pairs up to approx. 500 pairs at the end of the 20th century and as many as 1,500 pairs at the moment. The white-tailed eagle is a long-lived species that can reproduce only after reaching 5-6 years, therefore the loss of adult individuals is very dangerous for the entire population. Thanks to the research, species protection has been introduced, and the dangerous DDT has been withdrawn, which has reversed the dangerous trend of population decline. 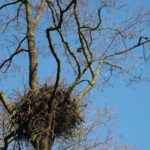 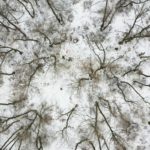 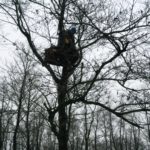 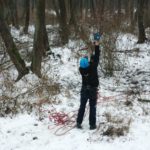 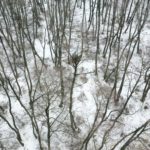 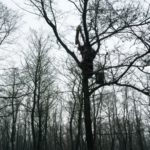