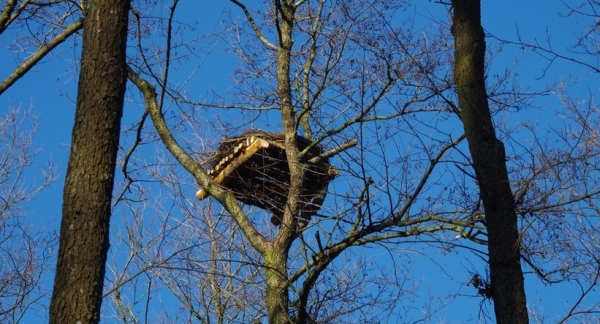 Posted at 06:27h in Aktualności by Milena Bilewska

In the Pińczów Forest District (RDSF in Radom), further activities are carried out under the LIFE + project “Renaturation of the inland delta of the Nida River”. A nesting platform for white-tailed eagles has been built in the marsh.

The project concerns a variety of habitats and species associated with the Nida valley. Among the planned activities, there are also those aimed at supporting the white-tailed eagle population. The forest complex covered by the project is a unique complex of 120 hectares of ash and alder riparian forests changing in some places into a typical alder and rush communities.

This complex is the largest, compact area of riparian forests in this part of the Nida valley, which foresters, due to their importance for biodiversity, excluded from use under forest management procedures. In the riparian forest complex, works are also planned to open and build small water retention facilities. Due to the sensitivity of these habitats, hydrological monitoring will also be carried out.

White-tailed eagles have long appreciated the natural values of Ponidzie. They like them if only because of Nida. Forests near lakes, river valleys, large fish ponds or wetlands are a suitable place for the existence of the white-tailed eagle in Poland. This is where they find fish and water birds that form the basis of their diet.

The employees of the Świętokrzyskie and Nadnidziańskie Landscape Parks Complex decided to support this species by placing a nesting platform in the Pińczów Forest District. It was created in the place where the birds were observed. This is an investment for years – nests that have been used by white-tailed eagles for many years are known.

The platform itself is solid and large – the structure constituting the base for expanding the nest was made on a wooden base with a diameter of approx. 1.2 m. It was placed on an alder tree at a height of 20 m. It is meant to encourage birds to make a nest on it, once they do, they can expand and enlarge it year after year. Nests that have been in use for many years can be as large as two meters in diameter.

The foresters hope that the birds will use the platform and will have a refuge in the Pińczów forests. If the white-tailed eagle settles in this area, a protection zone will be created around the nest. In the forest districts of the Regional Directorate of State Forests in Radom, 57 such zones have been designated so far, including 13 for the white-tailed eagle.