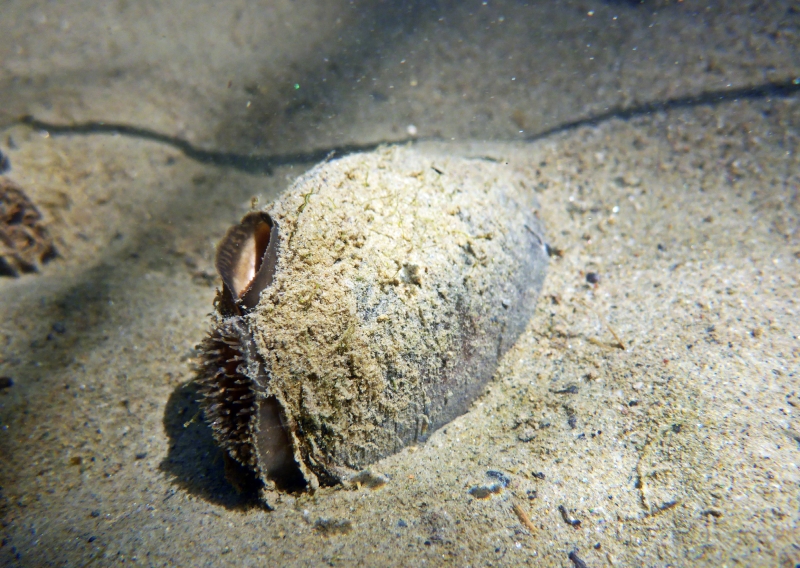 Posted at 06:40h in Aktualności by Milena Bilewska

In the area of the Nida Landscape Park, 19 species of molluscs included in the Polish Red List of Critically Endangered and Endangered Animals. There are 6 species of snails and 13 species of mussels here. Under the Life17 project, (Unio crassus) was covered with an active protection. The name of the animal itself comes from the very thickened shell walls.

This organism is an excellent indicator of surface water quality. During the day it is able to filter 40 l of water, hence it is sensitive to pollution, especially ammonium and nitrate ions entering the water from agricultural land. This mussel prefers a naturally shaped river bed with a sandy bottom. It can be found near the shore where the current slows down. A few dozen years ago, the river mussel was common  in almost the entire Poland. Its shells were used to make buttons, musical instrument linings and decorative objects. It currently occurs locally, on dispersed and isolated sites.

Under the project “Renaturalization of the Inland Delta of the Nida River”, degraded or endangered habitats will be restored, which will increase the population of the river mussel.

These molluscs are able to travel 2 meters on their one leg, but their offspring called glochidia attach themselves to the gills of certain species of fish and move over long distances and colonize new habitats. There are 12 species of intermediate hosts recognized, e.g.: three-spined stickleback, ninespine stickleback, European bullhead. Mature glochidia detach themselves from the host and start independent life, initially buried in the sand to a depth of even 50 cm. A threat to the river mussel is the introduction of fish species into the reservoirs on which the larvae cannot transform themselves. The project provides for work with local fishing clubs to stock the Nida River with appropriate species.