Storks preparing for breeding in Ponidzie 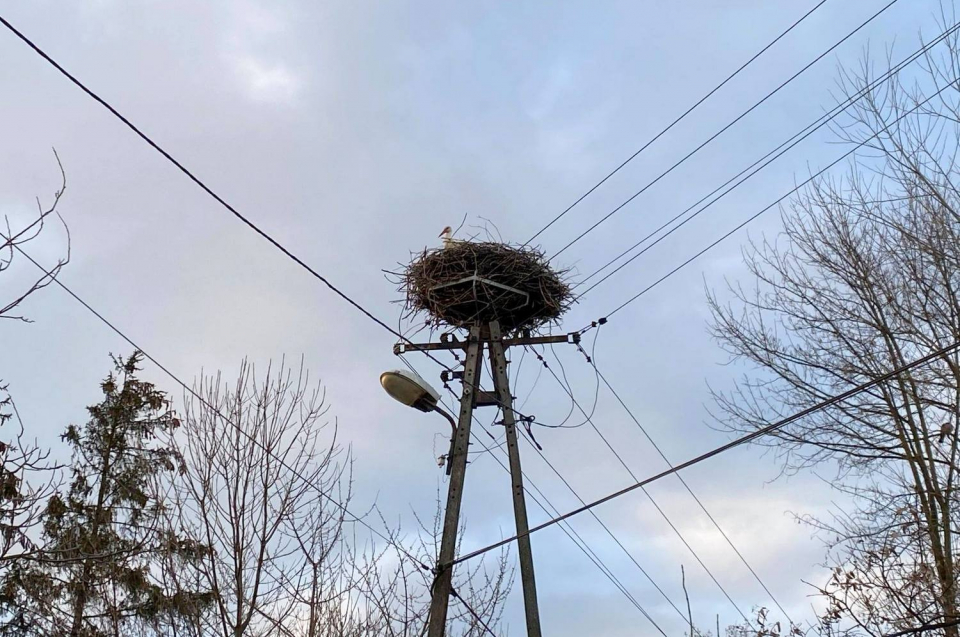 Storks are returning from their wintering grounds. Most of the couples are already in Poland. They fix their old nests right after arrival. Then they breed.

– Most of the nests are already occupied, and the first pairs that came to Poland have already started to lay eggs – informs the ornithologist and traveler Damian Czajka.

– Storks are here and they please the eye. The issue of building, superstructure, and improving the nest takes about a week, only then the stork begins to lay eggs. It takes about the same time as working on the nest. As a rule, there are four eggs in a nest. After putting them all together, incubation begins, which lasts about 60 days – says Damian Czajka.

When the female leaves the nest, the male takes over the role of brooding. Because both individuals must eat. Together, they also feed the young that we will be able to admire at the beginning of summer.

On a power pole in Broniszów in the Kazimierza Wielka municipality, there is a nest to which storks have been returning early in March for about 20 years – says Leszek Wesołowski – an inhabitant of the village.

– The first stork arrived on March 8. Twenty days later, the second arrived. After arrival, the storks have not been idle, they have already copulated. Now they collect twigs, couch grass and hay, which fill the nest, weighing about two tons, ‘he emphasized.

At the beginning of April, the stork came to Przybenic in the municipality of Skalbmierz. For over a dozen years, the nest has been located on the power pole next to the house of Beata Malara, the village mayor. She hopes that the female will soon join the male, and the couple will like the nest, which was secured last year.

– Power engineers who replaced the power pole, secured and left the nest. Together with our neighbor, we are longing for the second stork – he emphasized.

There are about 40 thousand nesting white storks  in Poland. Unfortunately, their numbers are decreasing year by year. The main threat is the reduction in the number of places suitable for breeding. For this reason, the Complex of Świętokrzyskie and Nadnidziańskie Landscape Parks has begun in 2019. an inventory of white stork nests in the Nadnidziański Landscape Park.

Marcin Słoma from the Świętokrzyskie and Nadnidziańskie Landscape Parks Complex, informs that as part of the Life project, employees care for nests and build new nesting platforms.

– Old nests deteriorate over time. If we create a food base for them, places suitable for establishing nests, the stork population will return – he adds.

The nests are also cleaned inside. The strings and foil that adult storks find in the fields and bring them to the nests as a building material are a deadly threat to the chicks. According to folk tradition, a stork brings good luck. It is also a symbol of motherhood.